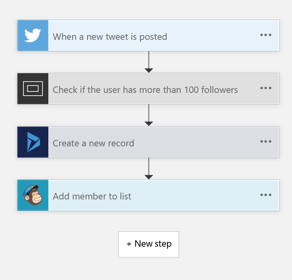 If you are familiar with services such as IFTTT or Zapier then flow can be seen as more of a business tool as it doesn’t support IoT items such as turning lights on and off.

As you would expect, there is strong support for Microsoft services such as Dynamics, OneDrive, Yammer and SharePoint and many other tools used day to day in business such as Twitter, DropBox, Facebook. MailChimp and much more.

There are around 58 supported apps and trigger actions that can be chained together to perform quite powerful actions. Being a Microsoft tool there are enterprise-wide controls so Flow can be deployed across your teams with restrictions by team or geographical area.

Flow is free to use for up to 750 runs per month with paid plans for heavier users. Some Office 365 and Dynamics 365 plans will also include Flow.

You can sign up to try Flow free here.

All contact with our consultants and technicians are rated by our support survey.

of clients rate our services very good or outstanding

Manage Cookie Consent
We use cookies to optimize our website and our service.
Manage options Manage services Manage vendors Read more about these purposes
View preferences
{title} {title} {title}
Keep up-to-date for all things Knibbs by signing up for our newsletter